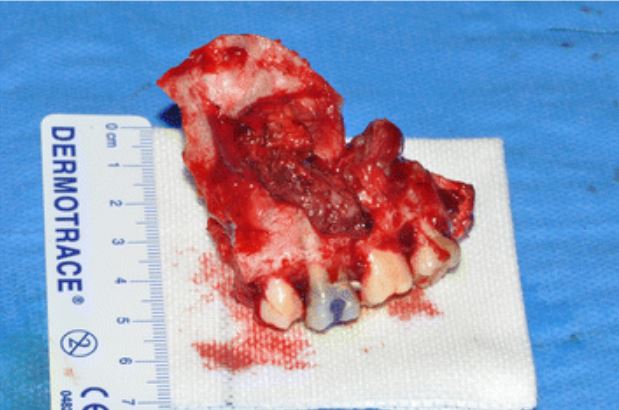 Oronasal/antral communication, loss of teeth and/or tooth-supporting bone, and facial contour deformity may occur as a consequence of maxillectomy for cancer. As a result, speaking, chewing, swallowing, and appearance are variably affected. The restoration is focused on rebuilding the oronasal wall, using either flaps (local or free) for primary closure, or prosthetic obturator. Postoperative radiotherapy surely postpones every dental procedure aimed to set fixed devices, often makes it difficult and risky, even unfeasible. Regular prosthesis, tooth-bearing obturator, and endosseous implants (in native and/or transplanted bone) are used in order to complete dental rehabilitation. Zygomatic implantology (ZI) is a valid, usually delayed, multi-staged procedure, either after having primarily closed the oronasal/antral communication or after left it untreated or amended with an obturator.
The present paper is an early report of a relatively new, one-stage approach for rehabilitation of patients after tumor resection, with palatal repair using loco-regional flaps and zygomatic implant insertion: supposed advantages are the concentration of surgical procedures, reduced time of rehabilitation, and lowered patient discomfort.

We report three patients who underwent alveolo-maxillary resection for cancer and had the resulting oroantral communication directly closed with loco-regional flaps. Simultaneous zygomatic implant insertion was added, in view of granting the optimal dental rehabilitation.

All surgical procedures were successful in terms of oroantral separation and implant survival. One patient had the fixed dental restoration just after 3 months, and the others had to receive postoperative radiotherapy; thus, rehabilitation timing was longer, as expected. We think this approach could improve the outcome in selected patients.

Major defects following maxillectomy for cancer include oronasal/antral communication, loss of teeth and/or tooth-supporting bone, and facial contour deformity. As a result, speaking, chewing, swallowing, and appearance are variably affected. A priority of restoration is focused on rebuilding the oronasal wall, by means either of flaps (local or free), or prosthetic obturator. Dental rehabilitation might follow by means of regular prosthesis, tooth-bearing obturator, and endosseous implants (in native and/or transplanted bone). Zygomatic implantology (ZI) has been first mentioned by Aparicio et al. in 1993 [1], then proposed by Brånemark [2] in order to overcome bone availability after maxillectomy. Commonly, this option is offered as a delayed procedure after tumor resection. Later, ZI has been employed in non-neoplastic, severely atrophic maxilla [3, 4, 5, 6, 7, 8, 9, 10, 11]. The present paper is an early report of a relatively new, one-stage approach providing for tumor resection, palatal repair with loco-regional flaps, and zygomatic implant insertion in three patients. The advantages are the concentration of surgical procedures, reduced time of rehabilitation, and patient discomfort.

Three patients have been operated on for malignant neoplasms affecting the maxilla at the Legnano Hospital, Italy, and at the Humanitas San Pio X, Italy. Written informed consent was obtained from each patient, and the study protocol conformed to the ethical guidelines of the World Medical Association Declaration of Helsinki—Ethical Principles for Medical Research Involving Human Subjects. The surgical plan was based on tumor resection, palatal repair, and zygomatic implant insertion in view of fixed dental rehabilitation. CT scan for zygomatic bone evaluation was part of the presurgical workup. No virtual planning of resection or of implant insertion was considered, and fixture placement was performed under direct vision, enhanced by simple resin guide simulating the resected dental arch. All patients were dentate (natively or after fixed restoration) and resulted partially dentate after tumor resections, thus fitting class IIA defect classification, according to Pellegrino et al. [12]. Osteotomies were achieved with surgical saw, burs, and piezosurgery. Frozen sections were obtained in order to demonstrate clean margins.
The zygomatic bone was adequately exposed. Implants from Noris Medical Ltd. (Nesher, Israel) were chosen. The working threaded part of the implant is 13 mm long, while the remaining, fully smooth shaft has 4-mm diameter and variable lengths. In all, length ranges from 35 to 57.5 mm. Implant drilling was performed using both straight and angled handpieces. The fixtures were placed at 35 rpm for the 2/3 of the apical and manually for the most coronal 1/3 working part. The palatal-alveolar repair was attained with soft tissue, local flaps: these were also wrapped around the implants. In order to obtain a durable watertight seal between oral and nasal/antral cavities, implant uncovering and loading were planned to be deferred by 3 months.
CT scans and/or panoramic radiographs were taken to monitor implant healing.
The screw-retained fixed prosthesis was considered for teeth replacement.

A 76-year-old gentleman suffering from lichenoid mucositis was operated on for verrucous carcinoma of the vestibular attached gingiva in the areas of maxillary left lateral and canine, in 2013. The maxillary left first premolar was missing, having been extracted elsewhere years before. Clear margins were obtained, and healing was uneventful. Then, the patient regularly attended follow-up examinations: on April 2015, a white, creamy discharge was noted from the gingiva covering the first premolar socket. The gingiva was opened and the socket debrided. Histologic examination of the removed material was consistent with verrucous carcinoma. CT scan showed a radiolucent area involving the socket of the first premolar and the surrounding bone (Fig. 1). The neoplasm was staged T4 N0. The patient underwent partial maxillectomy involving the antral floor, the alveolar bone, and canine through second premolar teeth. The first molar had abnormal mobility, hence was extracted. Two zygomatic implants (40 and 42.5 mm, respectively) were placed into the malar bone. The buccal fat pad was harvested and moved to both repair the oroantral communication and wrap the implants (Fig. 2). The buccal mucosa was advanced over the buccal fat pad and implants and closed with single sutures. CT scan was taken after surgery (Fig. 3). Time was allowed for soft tissue healing, and after 3 months implants were uncovered, 45° abutments placed and a fixed, screw-retained prosthesis ended the rehabilitation (Fig. 4). To reduce direct loading on zygomatic fixtures, the prosthetic device was splinted mesially to the lateral and distally to the second molar. After 1 year, the dental prosthetic restoration was unscrewed and zygomatic implant stability successfully checked (Fig. 5).

Fig. 1 Pt no. 1. CT scan showing a radiolucent area involving the socket of tooth 24 and the surrounding bone

Fig. 2 Pt no. 1. The buccal fat pad harvested and moved in order to repair the oroantral communication and to wrap the zygomatic implants

Fig. 4 Pt no. 1. The final screw-retained prosthesis placed after 3 months

A 43-year-old lady bearing an adenoid cystic carcinoma of the left maxilla was referred for treatment. Clinical and radiologic examination leads us to stage the tumor T4 N0 (Figs. 6 and 7). The patient underwent left extended maxillectomy (Fig. 8). A prefabricated occlusal replica (Fig. 9) allowed the most correct insertion of two zygomatic implants (40 and 42.5 mm, respectively). Then, the left temporalis muscle flap was entirely raised and rotated to fill the defect and to wrap the implants (Fig. 10). The fascial side was stitched to the mucosal margins in order to separate the sino-nasal cavity from the oral one (Fig. 11). The postoperative period was uneventful, and care had been taken in order to contrast trismus since the surgery. The final pathologic report alerted against perineural invasion, and some spotted margins close to the tumor. These data, together with the tumor nature and extension at presentation, led to address the patient to receive a full course of adrotherapy. Regrettably, the latter treatment carried some important sequelae (radionecrosis in the pterygoid region and trismus, mostly antalgic) that forced to delay dental rehabilitation. However, hyperbaric oxygen therapy and sequestrectomy granted the complete healing of radionecrosis and trismus improvement: implant stability was checked during this in-office surgery and appeared fully satisfactory, so did CT scan imaging. Pathologic examination did not reveal any relapsing disease.

Fig. 6 Pt no. 2. Transverse plane of the preoperative CT scan showing a radiopaque mass of the left maxilla

Fig. 7 Pt no. 2. Coronal plane of the preoperative CT scan showing a radiopaque mass of the left maxilla

Fig. 8 Pt no. 2. The extended portion of the left maxilla removed after maxillectomy

Fig. 10 Pt no. 2. The left temporalis muscle raised and rotated in order to fill the defect and to wrap the zygomatic implants

Fig. 11 Pt no. 2. The fascial side of the left temporalis muscle stitched to the mucosal margin to separate the sino-nasal cavity from the oral one

A 65-year-old gentleman suffering from squamous cell carcinoma of the upper gingiva underwent right partial maxillectomy (Fig. 12). The lesion appeared around three endosseous implants placed years before in the right canine and premolars areas. The CT scan did not demonstrate frank bone involvement, neither neck node extension (Fig. 13) nor distant metastases. Consequently, a large oroantral communication derived from tumor ablation (that had to include the three implants); the fat pad flap preoperatively planned was judged adequate after harvesting and actually used to close the defect. Compromised central incisor teeth were also extracted and immediately replaced by two standard implants. A third standard, the tilted implant was posed in the right canine area. Finally, one zygomatic implant was inserted in order to emerge in the right first molar area (Fig. 14). The postoperative course was complicated by limited suture dehiscence, without oroantral fistula, and spontaneous healing was then reached adopting a conservative treatment (Figs. 15 and 16). Pathologic examination demonstrated clear margins in the sinus mucosa, but bone invasion upstaged the patient from cT2 to pT4, and then, adjuvant radiotherapy was advised. Soft tissues were allowed to recover from radiation upshots and the prosthetic timing was subsequently scheduled.

Fig. 12 Pt no. 3. Ulcerated SCC of the right upper gingiva

Fig. 14 Pt no. 3. The zygomatic implant emerging in area of tooth 16 and surrounded by the buccal fat pad

In selected cases, maxillary resection, zygomatic implant(s) placement, and palato-alveolar repair through local flaps can be conducted as the same-stage procedure. Advantages would include the following:

This research did not receive any specific grant from funding agencies in the public, commercial, or not-for-profit sectors.

Availability of data and materials

PS ideated the approach, performed the surgery, took care of the patients, collected the data, and wrote the manuscript. FG planned and performed or assisted with the implant surgery. AM, LR, FC, and AB assisted with the surgery and took care of the patients. EG helped in the data collection, documentation, and editorial assistance. UG did the critical review. All authors read and approved the final manuscript.

The authors declare that they have no competing interests.

All patients have agreed and signed the consent for publication.

Ethics approval and consent to participate

Written informed consent was obtained from each patient, and the study protocol conformed to the ethical guidelines of the World Medical Association Declaration of Helsinki—Ethical Principles for Medical Research Involving Human Subjects.

Springer Nature remains neutral with regard to jurisdictional claims in published maps and institutional affiliations.

Open AccessThis article is distributed under the terms of the Creative Commons Attribution 4.0 International License (http://creativecommons.org/licenses/by/4.0/), which permits unrestricted use, distribution, and reproduction in any medium, provided you give appropriate credit to the original author(s) and the source, provide a link to the Creative Commons license, and indicate if changes were made.